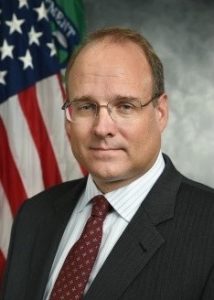 Mr. Marshall Billingslea is a retired senior U.S. Government official with experience across the Departments of Defense, State, NATO, and the Treasury. Now in the private sector, Mr. Billingslea runs his own firm, providing risk and advisory services to a diverse set of clients, and is a Senior Fellow with the Hudson Institute. He also has been appointed as a Commissioner on the bipartisan Congressional Commission on the Strategic Posture of the United States.

Most recently, Marshall was the Special Presidential Envoy for Arms Control, appointed by the President the with personal rank of Ambassador. Selected for his reputation as one of the government’s most effective international negotiators, Marshall led arms control talks on behalf of the U.S. Government with the Russian Federation and the People’s Republic of China, and worked with friends and allies in Europe and Asia on the development and deployment of defensive capabilities.

Prior to that, Marshall served as the Assistant Secretary for Terrorist Financing at the U.S. Department of Treasury (since June 2017). In that role he built international coalitions and led U.S. efforts to counter illicit financial activities around the globe. He also strengthened U.S. domestic anti money laundering capabilities and reorganized the Office of Terrorist Financing and Financial Crimes to employ cutting edge data analytics against threat networks. In 2018 he was selected unanimously by the 37 member countries of the Financial Action Task Force (FATF) — the global anti-money laundering and counter-terrorist financing body — to serve as the President of that prestigious organization. On his initiative, nations adopted the first ever set of anti-money laundering standards for crypto-currencies and virtual assets. Billingslea also co-chaired the global Counter-ISIS Finance Group and multiple bilateral negotiating fora with friendly and allied nations. Finally, Billingslea was the senior Treasury national security official involved with all merger and acquisition reviews by the Committee on Foreign Investment in the United States (CFIUS). During his tenure at Treasury, Billingslea traveled to, and worked with, Finance Ministers and Central Bank Governors in more than 100 countries around the globe.

Before rejoining the U.S. Government in 2017, Marshall spent more than eight years in the private sector. As a Managing Director with Deloitte Financial Advisory Services, Marshall ran the Federal Business Intelligence Services (BIS) group, where he provided due diligence services for a wide range of Federal clients and Fortune 500 companies. He specialized in investigating beneficial ownership structures, and advising businesses on the legal and regulatory risks associated with third party transactions. Under his leadership, BIS experienced explosive growth and became one of the most profitable service lines within Deloitte’s Federal practice. Because of his deep experience within the Department of Defense, he also served as external advisor to the Boards and CEOs of multiple Aerospace and Defense Companies, and as an independent CFIUS monitor for several companies.

From 2001-2009 Marshall served in several senior roles within the Department of Defense and at NATO. As the Deputy Under Secretary of the Navy, he oversaw the

process of long-range budget development for both the United States Navy and the Marine Corps, and served as the Department’s “number two” in processes run by the Deputy Secretary of Defense. He also exercised direct oversight of sensitive Navy and Marine Corps intelligence and special operations-related activities.

Prior that, Marshall was NATO’s Assistant Secretary General for Defense Investment, the senior U.S. civilian within the Alliance structure. His responsibilities included the Alliance’s armaments cooperation policies and programs, its military common funding, and the NATO standards-setting processes for military equipment. He also served as Chairman of NATO’s Conference of National Armaments Directors (CNAD) and as Chairman of the Board of Directors for NATO’s Consultation, Command, and Control Organization. At his initiative, NATO launched a number of new defense capabilities, including creation of the NATO Special Operations Headquarters, acquisition of the Active Layered Theater Ballistic Missile Defense system, purchase of three C-17s to create the Strategic Airlift Capability, and a program of work to invest in new technologies to defend against terrorism.

Marshall also served as the Deputy Assistant Secretary of Defense for Negotiations Policy – the U.S. Secretary of Defense’s chief negotiator for all major international agreements. He was the principal DoD representative on numerous U.S. arms control delegations, and the U.S. Head of Delegation for Transparency and Verification negotiations with the Russian Federation in connection with the Moscow Treaty on Strategic Nuclear Reductions.

Before joining the Pentagon, Mr. Billingslea served for over six years as the Senior Professional Staff Member for National Security Affairs on the Senate Foreign Relations Committee. He was the senior advisor to the Chairman and members of the Committee on all proliferation, arms control, defense, intelligence, and counter-terrorism issues within the Committee’s purview. Further, Mr. Billingslea conducted day-to-day oversight of the U.S. arms sales process, and was responsible for reviewing and approving all exports licensed under the U.S. Munitions List and the Arms Export Control Act.

Mr. Billingslea holds a Bachelor of Arts from Dartmouth College and a Master of Arts in Law and Diplomacy from Tufts University. He has been decorated with the Cross of Terra Mariana by the President of Estonia; the Knight’s Cross by the President of Poland; and the Cross of the Order of Merit of the Czech Republic. He has been awarded the Defense Medal for Distinguished Public Service by the U.S. Secretary of Defense and decorated by the U.S. Secretary of the Navy with the Distinguished Public Service medal. For his work at the Treasury, Marshall received the Treasury Medal.