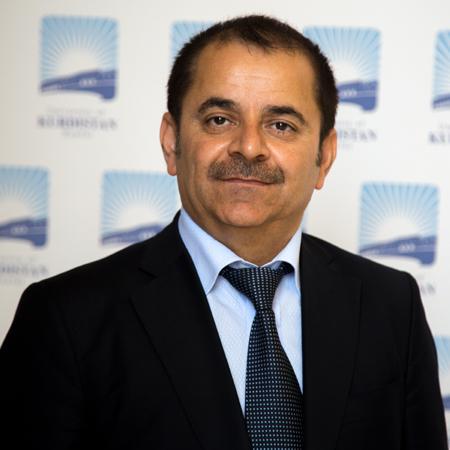 Dr. Ibrahim Ismael Hamarash is a professor of Computer Engineering.

He is the co-founder of the Mobile Education Centre for Regeneration Energy and Automation (MECREA) with Karlsruhe University for Applied Science, Germany.  He founded the Erbil Centre for Sustainable Development with five other professors from five international universities to support KRG projects. He was the founder and head of the Software Engineering Department at SU, 2000-2004, Head of Electrical Engineering Department at SU, 2007-2011. Vice President for Scientific Affairs and postgraduate studies, 2011-2017, and the Dean of the Engineering College at SU 2017-2018 before moving to UKH in April 2018.

He is the author of 2 books, the first National Computer Dictionary (English-Kurdish), (1999) and Computers (a textbook for year 7 and 8 students in Kurdistan Region) (2001). He published  more than 45 papers in scientific journals such as Nonlinear Dynamics, Robotics, The European Physical Journal EPJ-ST, Bifurcation and Chaos, Chaos, Solitons & Fractals . He has served as the chair and keynote speaker for many International Conferences in Kurdistan and abroad.

In the industrial sector, he designed and supervised numerous Electrical, Control, Computer and Software Projects for international agencies and companies between 1993-2011.

Dr. Ibrahim has supervised 25 MSc. students and 5 PhD. students in the field of Electrical, Robotics, Computer Systems, Software Engineering and Information Technology. He co-supervised two PhD students with University of Florida and One with Czech Technical University in Prague. He is a member of the Kurdistan Engineers Union, the Iraqi Engineers Syndicate and senior member of IEEE.